Make plans to attend Galveston’s ever popular annual sea turtle symposium on Saturday, February 25, 2023! This informative and engaging seminar presented by the Galveston Island Nature Tourism Council (GINTC) will be in-person this year at Moody Gardens!

Hear about how Turtle Island Restoration Network is protecting sea turtles and other marine wildlife, TIRN’s latest initiative to bring a reusable food ware system to Galveston and their new sea turtle action center and what you can do that will contribute to this movement of reaching a blue green planet.

Alicia Walker will take us on a journey 40 years in the making as she presents, 2022: 40 Years of Sea Turtle Conservation at the Amos Rehabilitation Keep. ARK was established in 1982 and focuses on the rescue, rehabilitation, and release of marine birds, birds of prey, and sea turtles on the central coast of Texas. Alicia will be presenting on the past year of sea turtle conservation at the ARK, as well as reflecting on the accomplishments and the many challenges throughout the 40 years of conservation. She will also look towards 2023 discussing what the ARK hopes to achieve in the coming year.

The Gulf Center for Sea Turtle Research was created to address the data gaps and research needs to conserve sea turtles in Texas, the western Gulf and throughout the Gulf of Mexico. The Center seeks to organize sea turtle biologists in the region and speak with one voice to attract attention and funding, for sea turtle research activities and conservation priorities that will protect sea turtle populations and their vital habitats from the beaches to the ocean. Dr. Marshall will provide an update on the Gulf Center for Sea Turtle Research.

This once a year event sells out quickly as space is limited.

Note: There will be no sea turtles at this event.

* Registrants must be at least 12 years old and if under 18, must be accompanied by an adult.

Light breakfast, coffee and juice will be served 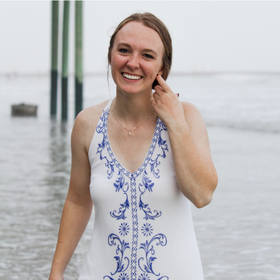 Morgan is a recent graduate from Texas A&M University at Galveston, having received a B.S in Marine Biology with a minor in Diving Technology and Methods. Her strong passion for ocean conservation and education grew during her time working and volunteering with numerous non-profit organizations, eventually leading her to her current position with Turtle Island Restoration Network. 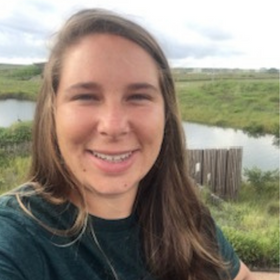 Alicia Walker is the Program Coordinator at the Amos Rehabilitation Keep (ARK) at the University of Texas Marine Science Institute in Port Aransas, Texas where she has been since 2016. Her work at the ARK is focused on the conservation of sea turtles and marine birds through research, rehabilitation, and outreach. Prior to the ARK, Alicia worked on research and conservation projects focused on marine, terrestrial, and freshwater turtles. Most recently working for Padre Island National Seashore as a member of the Natural Resources Division and the Sea Turtle Science and Recovery Division.  During her time there, she made scientific discoveries with red tide research and received the STAR award for her dedication to the National Park Service and Padre Island National Seashore. 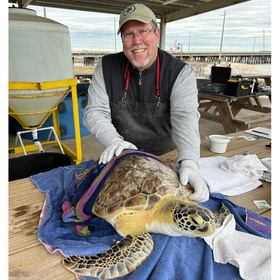 Christopher D. Marshall is a Professor in the Department of Marine Biology and the Director for the Gulf Center for Sea Turtle Research at Texas A&M University, Galveston Campus. He also has an appointment in the Department of Ecology and Conservation Biology at Texas A&M University, College Station and is a Research Associate at the Smithsonian Institute’s National Museum of Natural History.

He is a recent recipient of a U.S. Fish and Wildlife Service and National Park Service Award for Leadership in Sea Turtle Stranding, Rescue and Rehabilitation. His work at the National Museum of Natural History has resulted in the discovery of a new fossil whale species and two new pinniped species.

Dr. Marshall stewarded the Gulf Center for Sea Turtle Research to address the data gaps and research needs to conserve sea turtles in Texas, the western Gulf and throughout the Gulf of Mexico. The Center was approved in April 2019 by Texas A&M University and seeks to organize sea turtle biologists in the region and to attract attention, and funding, for sea turtle research activities and conservation priorities that will protect sea turtle populations and their vital habitats.

The Gulf Center for Sea Turtle Research is now the lead for sea turtle nesting monitoring, sea turtle rescue and sea turtle rehabilitation on the Upper Texas Coast. The Center recently opened a sea turtle hospital that rehabilitates sick or injured sea turtles. The combined stranding and rehabilitation programs provide a much needed conservation service to the region and nationally.