The Galveston Island Nature Tourism Council is wild about Galveston, and with good reason! Our historic beach town on the Gulf of Mexico offers engaging natural wonders in every sector of the island and its surrounding areas, every month of the year. We know, because we help connect people with nature experiences and outdoor adventures. We invite you to explore this website and learn about our nature-related events and programs, and how we promote the value of natural habitats and resources in the Galveston area.

A six-foot permanent sculpture of the elegant Eskimo Curlew, commissioned by Galveston Island Nature Tourism Council, and a special exhibit of five extinct birds, all part of The Lost Bird Project by Todd McGrain, recently were installed in Galveston Island State Park and the gardens of The Bryan Museum.

The bronze Eskimo Curlew is the sixth sculpture of The Lost Bird Project. The five large statues at the museum represent the other permanent Lost Bird Project sculptures located throughout North America. Galveston Island Nature Tourism Council, Houston Audubon, and The Bryan Museum have partnered to bring the exhibit to the island. 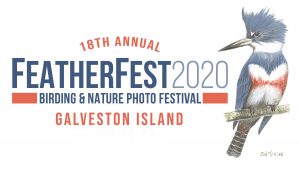 In keeping with recommended novel coronavirus precautions, the Galveston Island Nature Tourism Council has cancelled the FeatherFest Birding & Nature Photo Festival planned for April 14 – 20 in and around Galveston, Texas. Your health and safety are of utmost priority, and it has become time to take necessary steps to avoid contributing to the spread of this pandemic. Our refund process is underway. Thank you for your continued support. We value your participation and interest in connecting with nature and look forward to seeing you next year at FeatherFest, April 15 – 18!

SPRING MIGRATION IS ON ITS WAY!

by Kristine Rivers of Birding for Fun 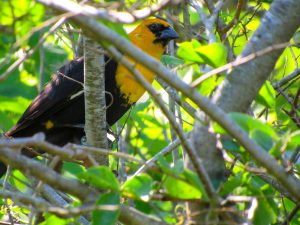 If you’ve been out birding in the last week or so, you’ve probably noticed that many species have already begun molting into breeding plumage – a sure sign that spring migration is on its way! Hormonal changes are triggered by the increase in the hours of sunlight per day, as well as the shift in wind direction in the spring to being predominantly south to north.

These hormonal changes not only prompt plumage changes, but the desire to eat and begin building up fat reserves for migration. Many omnivores shift from eating seeds to insects and caterpillars to prepare for migration. It takes some species longer to build fat, so they begin bulking up sooner. Hormonal changes also create the deep desire to fly in a certain direction.

Galveston is positioned perfectly within the Mississippi and Central Flyways, with migrants passing through in spring from South America to North America both directly over the Gulf of Mexico and circumnavigating (going around) it. As birds move back to their breeding grounds, where there is less competition for resources and territories, they stop here to refuel along the way, crucial for remaining healthy for breeding season.

Wanna be a nature guide?

Enroll now in our Certified Nature Guide or Nature Ambassador course! These programs will provide a cadre of knowledgeable guides and ambassadors to help visitors and residents experience Galveston’s natural side.

Thanks to the Galveston Island Park Board for their tremendous support. We also appreciate the Galveston Bay Area Chapter of the Texas Master Naturalists for providing the content for the coursework.  Plus, kudos to Suzanne Becker, Bobette Brasfield, Cindy Liening, Maureen Nolan-Wilde, Diane Olsen, and Chris Roper for their enthusiasm and commitment to making these certifications a reality!

Special Thanks To Our Great Egret &
Reddish Egret Corporate Members